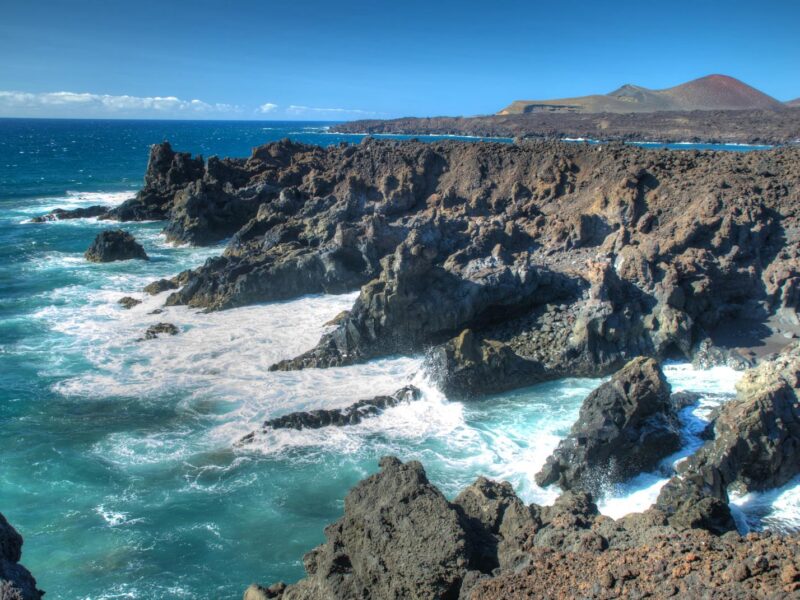 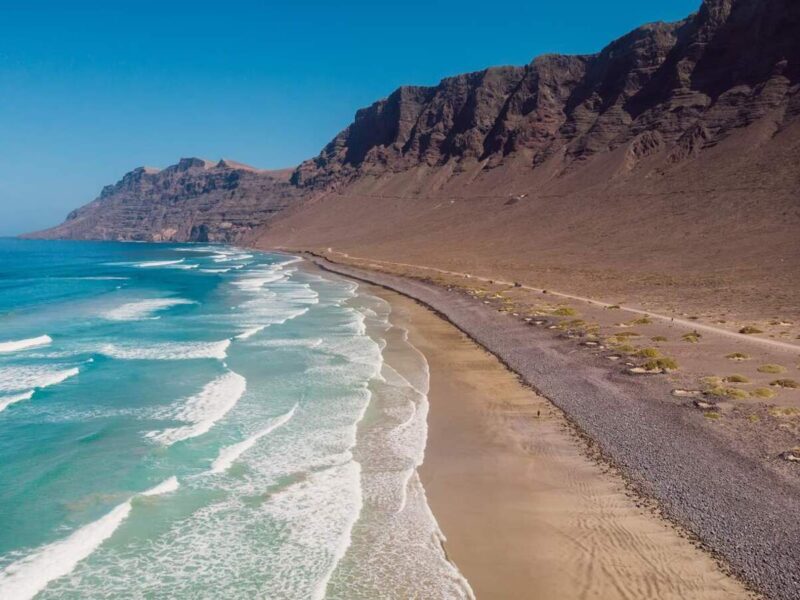 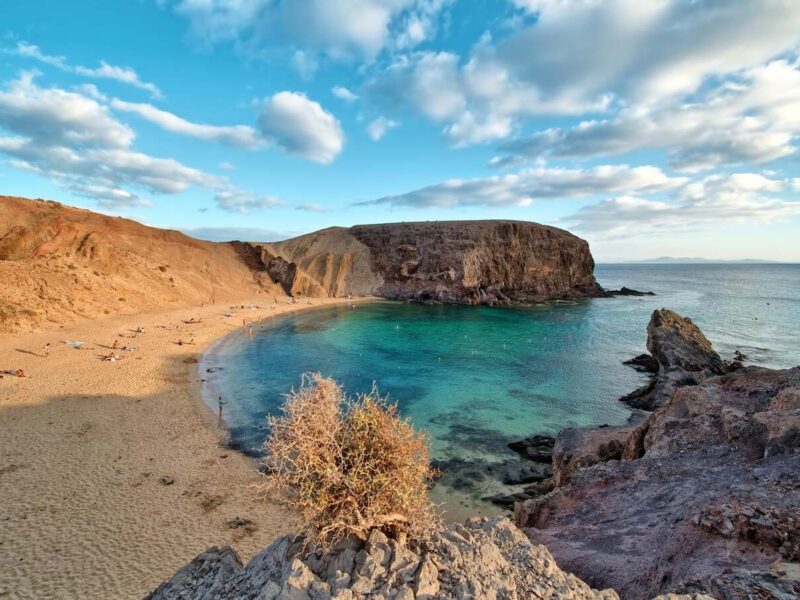 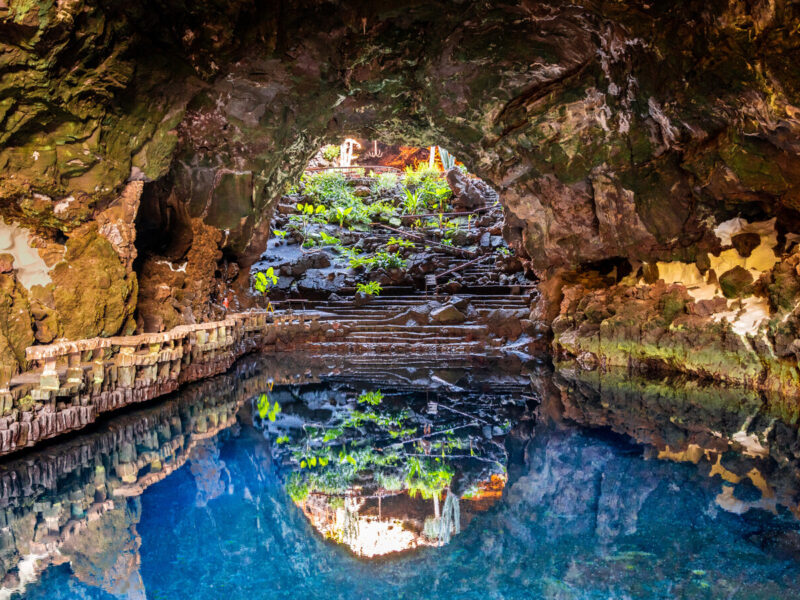 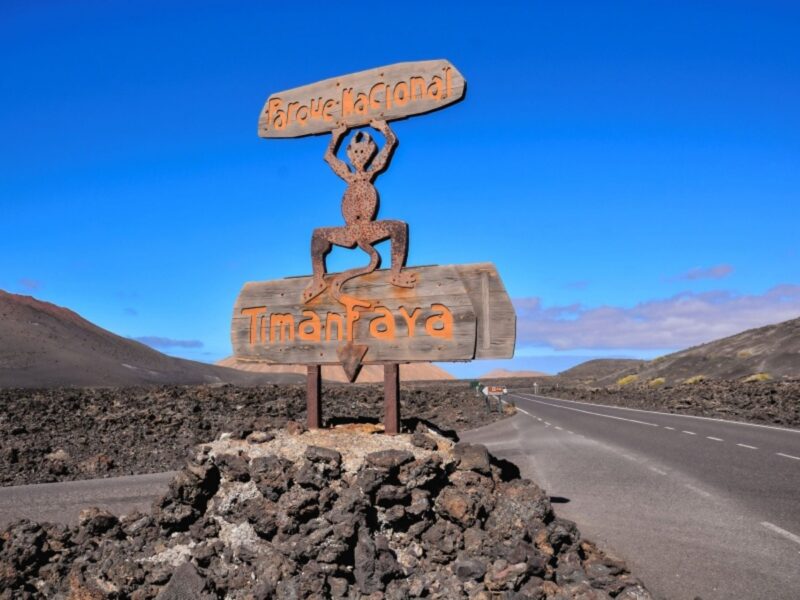 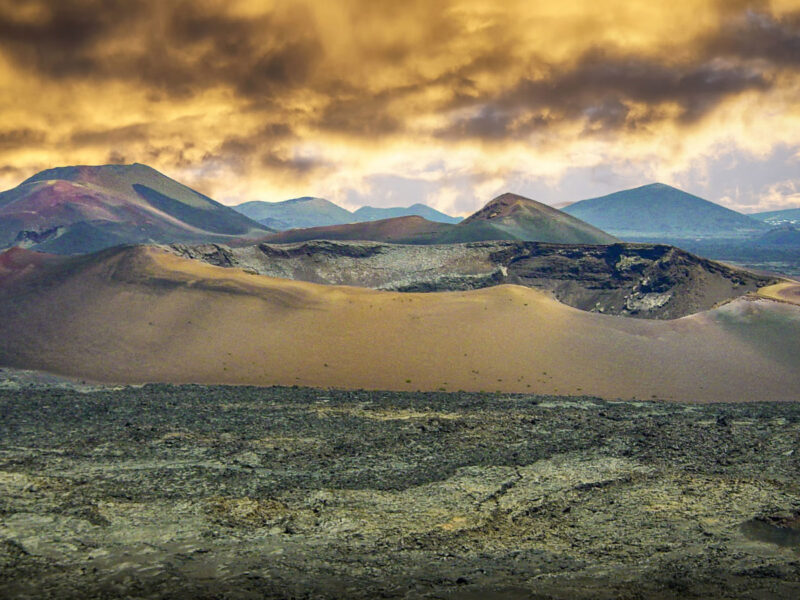 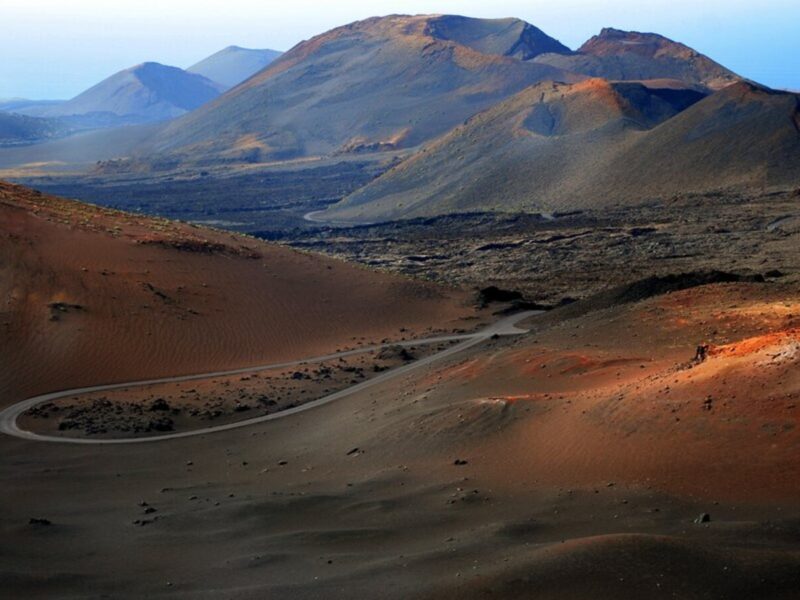 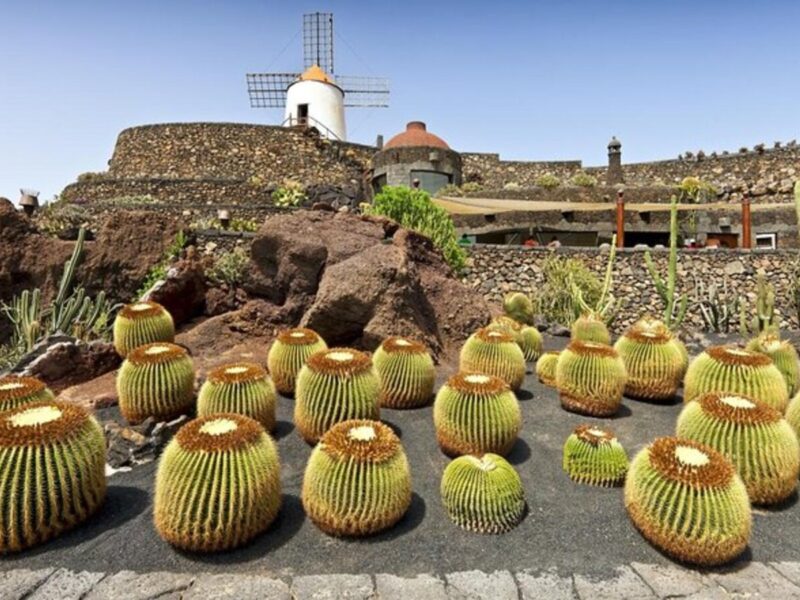 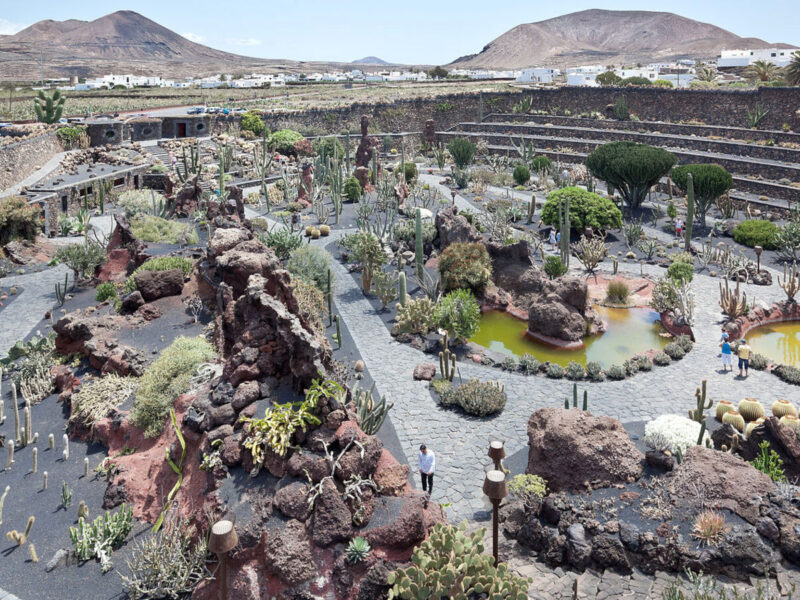 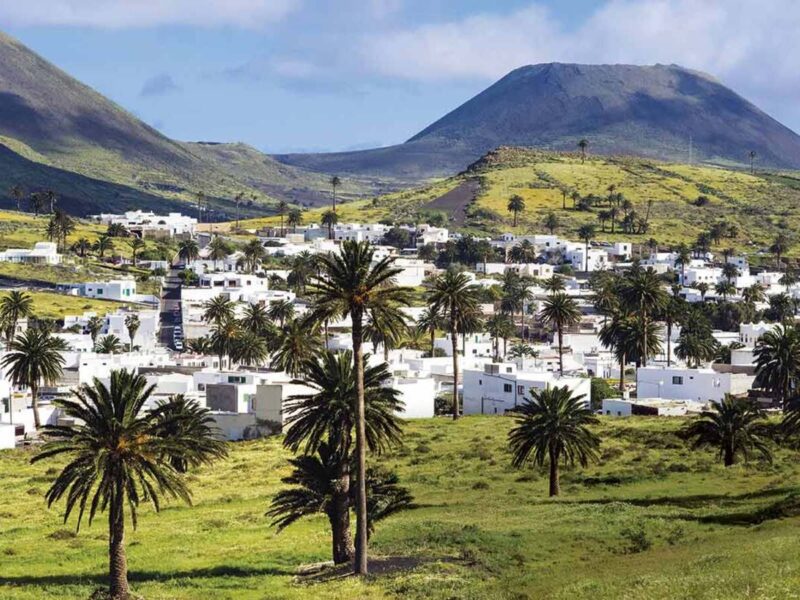 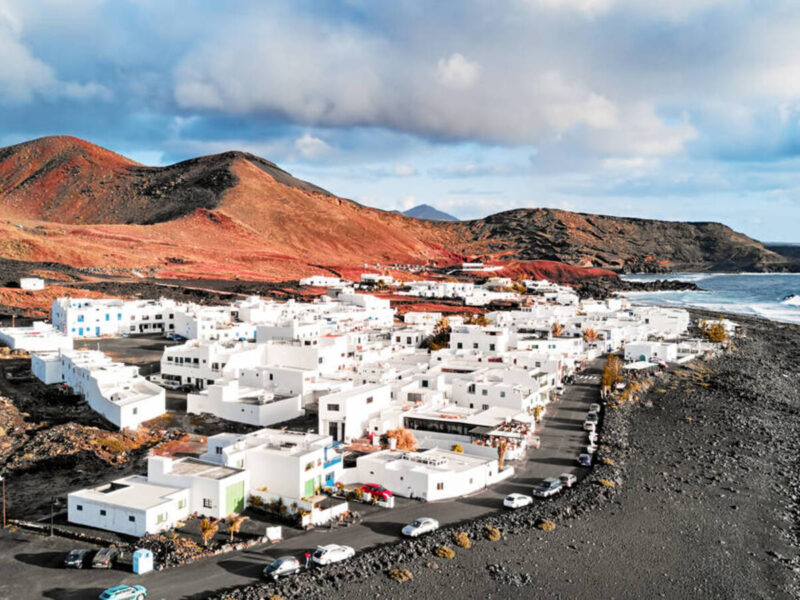 Lanzarote is synonymous with volcanoes, lava fields, rocks in impossible shapes, black and red earth that contrasts with the typical whitewashed houses, the deep blue sea and the light blue sky. The scenery in the easternmost of the Canary Islands also contains stark, rolling mountains, beautiful beaches of white and golden sand, lush palm groves… and silence, which is also an enigmatic part of the Lanzarote landscape.
On this biosphere reserve island, there are lively tourist resorts and little villages where all is peace and quiet. The large hotels and bungalows of the coastal towns coexist with rural houses, villas and boutique hotels in the charming inland villages. A full top-class range to guarantee the best holidays at any time of year in the extraordinary climate. Unbeatable conditions, along with quality services and infrastructures, that professionals and amateurs of all kinds of sports have found on this island for training. Lanzarote has been developed sustainably and in harmony with the surroundings, especially thanks to the tireless work of the universal artist César Manrique, who, besides leaving a mark on the landscape with his enormous talent, was able to transmit love and respect for the land to his countrymen and women. A land where tourism, art and nature combine.
In addition to the amazing scenery, which sometimes reminds us of the surface of Mars, Lanzarote is also fascinating because of the miracle that arises from its volcanic earth. Although it would seem impossible, life emerges from it making it possible to produce its famous wines with their designation of origin. Is that a different island or what?

• Exploring inspiring volcanic landscapes
Lanzarote’s volcanic landscapes awaken unique sensations in us. They are inspiring, enigmatic, mysterious… They trap us in an intimate connection that is difficult to explain. They fill us with energy. Why is this? Is it because we are seeing the power of nature? Because they are taking us back to our origins?
Questions that are instinctively answered when we find ourselves in Timanfaya National Park, the island’s maximum expression of volcanism and one of the most representative in the Canary Islands Archipelago. A jagged, harsh, wild landscape where the most sepulchral silence is especially noticeable. The Montañas del Fuego (Mountains of Fire) can be visited on a guided bus tour, during which we are awestruck by a colourful horizon, occupied by volcanic cones, lava fields, whimsically-shaped rocks… Nature has chosen a special palette of colours for this scenery, mixing reds and oranges with ochres, greys and blacks.
Very close to the entrance to the National Park is the Echadero de los Camellos, where you can climb up onto a camel and experience a ride around the volcanoes, feeling the breeze and hearing the crunching of fragments of lava, surrounded by a striking landscape.
And that’s not all, as volcanism can be seen everywhere in Lanzarote: at the coast, in the fields, in the inland villages… However, in spite of the extreme conditions of the environment, several generations of islanders have managed to make the most of this apparently sterile land. Yes, only ‘apparently’, because this island hides many surprises under its volcanic cloak.
In Lanzarote, we can also enter a fascinating underground world created by eruptions. Volcanic tunnels and caves that can be visited thanks to respectful, sustainable action. Spaces such as Los Jameos del Agua, which the amazing artist César Manrique had a hand in, and the Cueva de los Verdes are clear examples that provide us with a chance to discover some secrets from the entrails of the earth.

• Villages among volcanoes
As the different island, it is only to be expected that its villages should also be different. The successive volcanic eruptions that created the current landscape were also decisive for the settlements where life takes place among volcanoes and lava. It wasn’t easy, but the result couldn’t be better, both for the locals and for visitors to this unusual island territory.
In fact, in the extensive area occupied by Los Volcanes Natural Park, there is only one town: El Golfo, a picturesque seaside town that you simply have to visit and have some delicious fresh fish while you are there. Yaiza, which was the first European settlement in the Canary Islands Archipelago, is at the edge of the area buried by the volcanic eruptions of Timanfaya. This delightful village stands out especially for its well-preserved traditional architecture.
Another town that should be on our route is Teguise, the former capital city of all of the Canary Islands, which still retains an air of splendour in the cobbled streets of its historic quarter. There is a famous market here every Sunday that attracts thousands of local visitors and tourists. Haría is the greenest area of the island and it is, in fact, also known as the ‘Valle de las Mil Palmeras’ (valley of the thousand palm trees), which are scattered among the typical whitewashed houses.

• Places where art and nature merge
Lanzarote was lucky enough to have César Manrique, a universal, multifaceted artist who knew how to combine art and nature like nobody else. A defender to the end of natural spaces and deeply in love with the island where he was born, he only intervened in them to improve them and make them places to be admired eternally. He left a large part of his artistic legacy in Lanzarote. Perhaps the greatest exponent is Los Jameos del Agua, one of the most visited tourist attractions on the island, where Manrique really surpassed himself. This volcanic tunnel, with its famous, spectacular natural auditorium, is home to a highly singular geological formation, an inner lake caused by filtrations of seawater in which a little, blind, white crustacean lives and is also one of a kind in the world. The Mirador del Río is another of his creations. Perfectly integrated into the surroundings, from the natural vantage point over the striking cliffs of Famara, you see spectacular views of the Chinijo Archipelago, formed by the island of La Graciosa and four islets. In the exceptional Timanfaya landscape, he managed to masterfully incorporate the El Diablo Restaurant, a cylindric glass construction that make us feel a part of the volcanic surroundings.
To this route for admiring the work of the unbeatable artist, we should also add the Cactus Garden, the Castillo de San José and the Museo del Campesino (Museum of the Peasant Farmer), which was his house in Taro de Tahiche—and is now the headquarters of the Foundation—built over a lava flow. Another must-visit is the César Manrique House-Museum in Haría, an old farmhouse in a palm grove that he refurbished to live and work in until his death in 1992 in a fatal traffic accident.

• Paradise for sports
The island has made a name for itself in the training diaries of Europe’s sporting elite, especially during the winter months when the cold on the continent makes it impossible to do sports in the open air. Running, cycling, golf, all kinds of water sports… There is no sport that can’t be enjoyed in Lanzarote thanks to its extraordinary year-round climate, the amazing surroundings and a wide range of top-class accommodation, facilities and services able to meet the most demanding requirements. Proof of this are the important sporting competitions held on the island, such as the Ironman, one of the toughest triathlons in the world. Combining holidays with physical exercise is a great idea. And if Lanzarote is the chosen destination, success is guaranteed.

DIRECT FLIGHT FROM ALICANTE TO LANZAROTE

In Costa Teguise, one of the most welcoming and central destinations on the island of Lanzarote, you can find the Hotel Beatriz Costa & Spa. A high quality 4-star hotel in which you can take a break and enjoy yourself whatever time of year. The Hotel Beatriz Costa & Spa is perfect for a getaway with your partner, holiday with all of the family or a spa experience abroad, although we also specialise in conferences, conventions and social and family events. The wide range of services and facilities ensures that each guest can fully enjoy the trip that they desire. The Hotel Beatriz Costa & Spa emerges as an excellent choice due to its spacious rooms, Spa & Wellbeing Centre, as well as the 2,000m² of outdoor swimming pools and indoor gardens featuring waterfalls and lakes in which you can disconnect from the world.