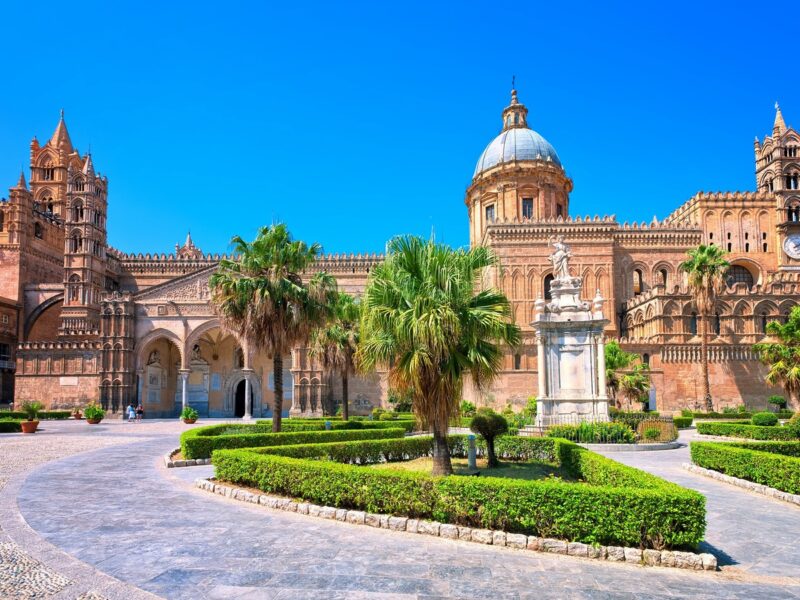 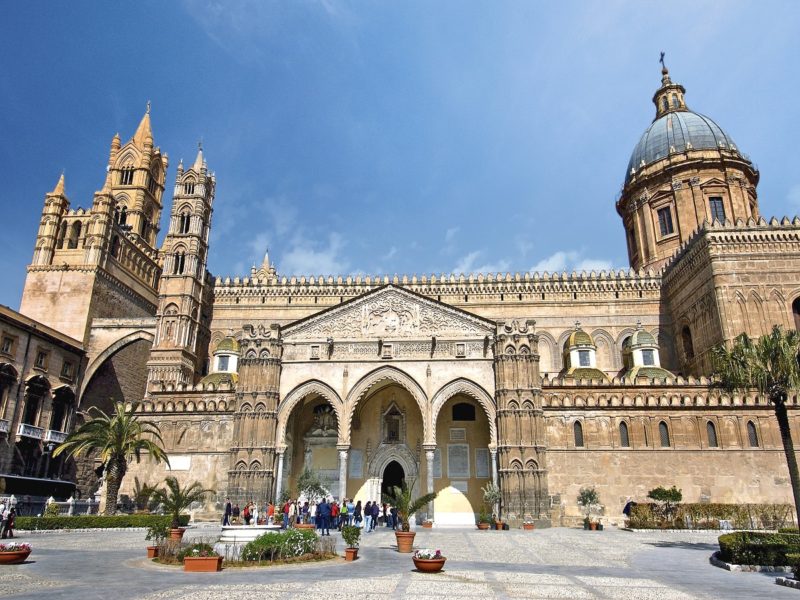 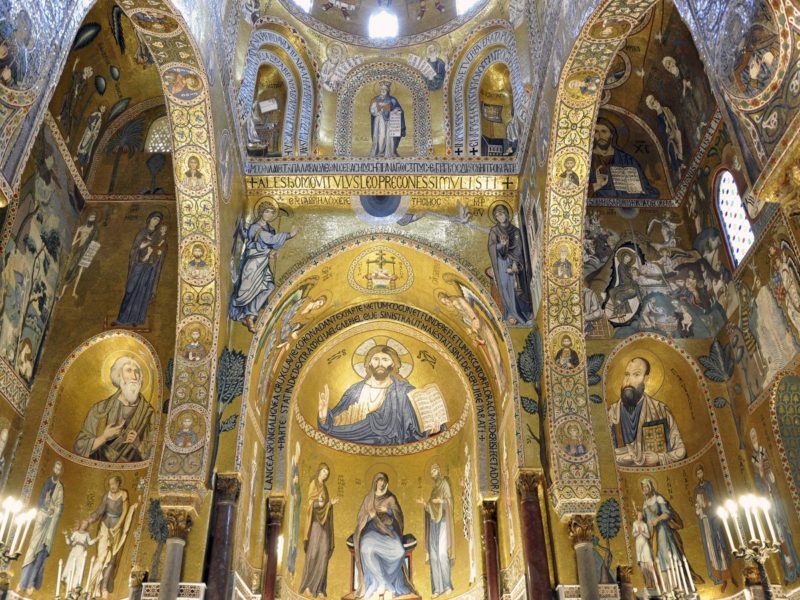 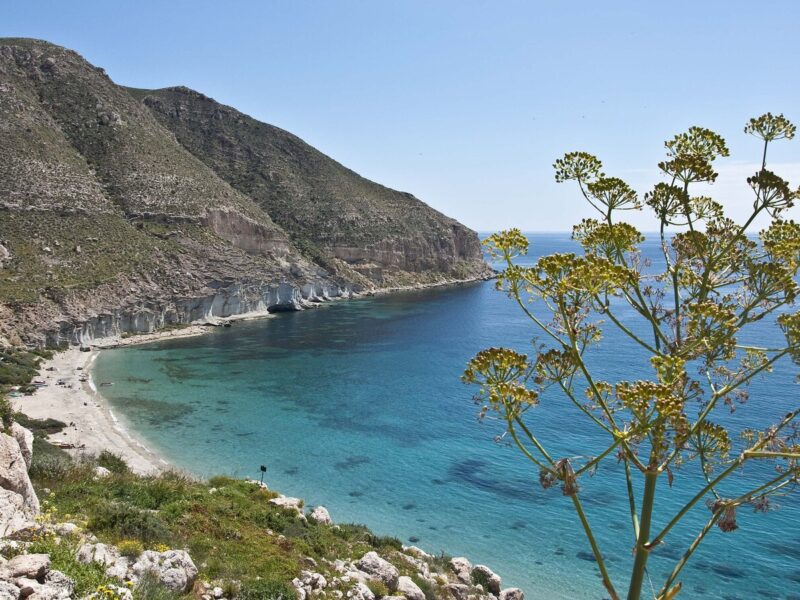 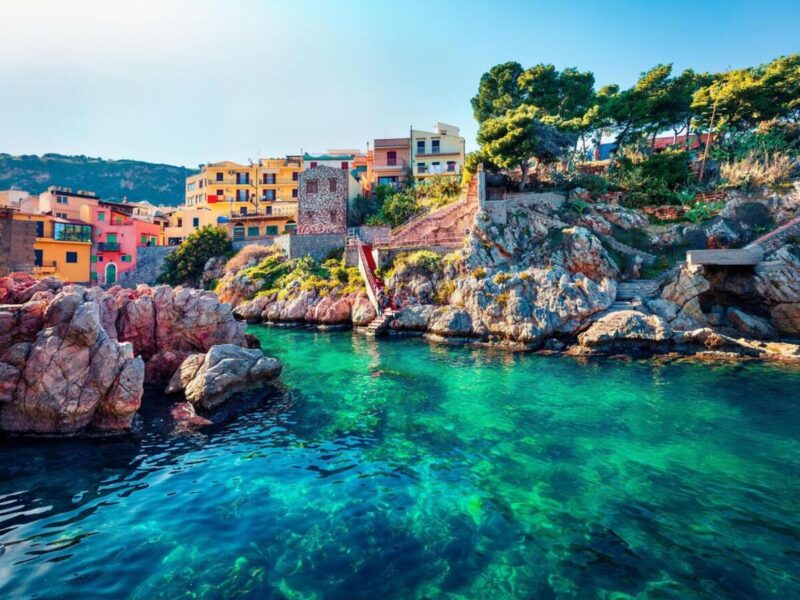 HERE ARE TEN REASONS WHY YOU’LL LEAVE YOUR HEART IN THIS CITY.

1. A dip in the Baroque of Casa Professa.
The Arab-Norman Palermo itinerary will certainly take us to places of extraordinary beauty. But a tour of Baroque Palermo will be just as surprising! Palermo’s most symbolic Baroque building is probably the Chiesa del Gesù, better known as Casa ProfessaIt stands on a rise full of dark ravines where, according to tradition, hermit saints once took refuge and where early Christian catacombs can still be found. A violent bombing raid in 1943 destroyed a large part of the prestigious monument. Restoration work has restored almost all the stucco and frescoes, restoring the church to its original appearance. The interior blends late Renaissance rigour with a new Baroque spatial style.

2. Le stanze al Genio
The name Casa Museo Stanze al Genio refers to the nearby Fontana del Genio in Palermo, at Piazza Rivoluzione. Once through the large doorway, we are quickly drawn to the stairs by the rich flooring and original frescoes of the late 18th-century building. What will appear before us is a unique collection of more than 2300 Italian majolica tiles. They are the pieces of a huge artistic puzzle from southern Italy (mainly Campania and Sicily) from the late 16th to early 20th century. The collectors, owners of the building, will take us into a world where art takes on the dimensions of a small walkable square.

3. The “theatrical” Piazza Vigliena: the Quattro Canti
The most scenic urban corner of Palermo is undoubtedly represented by the Quattro Canti, the point where Via Maqueda and Via Vittorio Emanuele intersect dividing the city into four historic districts (districts). Four buildings outline the profile of the suggestive seventeenth-century square, known as Piazza Vigliena, which every July 14 awaits the most significant stage of the exciting procession of Santa Rosalia. Four main elements stand out on each facade: a fountain which represents one of the rivers that once crossed the city; an allegory depicting one of the seasons; the statue of one of the Spanish kings and, on top, the statue of one of the patron saints of Palermo, each placed to protect a district. Throughout the year, at least one facade of the buildings is illuminated by the sun: this is why the Quattro Canti are called “Teatro del Sole”. The square, whose shape resembles an octagon with mussed edges, once housed public festivals and capital executions. This explains why it is also known as the “City Theater”.

4. A premiere at the Teatro Massimo
But also a simple guided tour will do. The Massimo is Italy’s largest opera house, the third largest in Europe after the Paris Opera House and the Vienna State Opera, and a symbol of the grandeur of the Art Nouveau period, when Palermo was so beautiful and elegant that it attracted and hosted the most sought-after European courts. Today, you can plan a visit to the city and then attend an opera, ballet or symphonic music premiere, rediscovering the atmosphere of the glorious Florio days.

5. UNESCO Heritage Opera dei Pupi
This is the first Italian UNESCO Heritage site to be included in the Intangible and Oral Heritage of Humanity list in 2008. Throughout the island, you can watch performances of the Opera dei Pupi by talented puppet masters who have made this tradition a worldwide art icon. The theatre venues in Palermo, together with the Antonio Pasqualino International Puppet Museum, are a truly unique attraction.

6. Catacombs of the Capuchins
A place you wouldn’t go if you were dead? Everyone says so, but then it’s impossible to resist the temptation to go and see them. The Capuchin Catacombs contain 8,000 mummified bodies: from Capuchins to members of noble families, from the bourgeoisie to representatives of the clergy. The state of preservation of the countless corpses on display makes the cemetery of the Convent of the Capuchin Friars one of the most impressive places to visit in the world. A macabre spectacle that highlights the customs and traditions of Palermo’s city society during the period between the 17th and 19th centuries. It is also home to the world’s most beautiful mummy: little Rosalia.

7. The Kalsa
In the old Kalsa quarter, with a little imagination, we can smell an intense scent of basil wafting through the air. All thanks to one of Sicily’s most fascinating stories, which explains the birth of the artistic Teste di Moro – the famous Moorish Heads. Perhaps that’s why it seems natural to us, to find near the Palazzo Abatellis, the Galleria Regionale d’Arte Moderna, curated by the Cultural Heritage Department, at Palazzo Abatellis. The palace is a magnificent example of Gothic-Catalan architecture. Inside, the arrangement of the works is truly innovative: the use of metal or wooden supports on coloured backgrounds of fabric, Venetian stucco or wooden panels enhances the beauty of the paintings. In the marvellous rooms of the historical building, we find important masterpieces by Domenico and Antonello Gagini, Filippo Paladini, Antonello da Messina and Francesco Laurana. There are also works by Pietro Novelli, Antoon Van Dyck and Vito D’Anna. The Annunciata by Antonello da Messina alone is worth a visit. Another beautiful aristocratic residence full of history in the Kalsa is Palazzo Mirto: Murano chandeliers, Chinese lacquered panels, clocks, tapestries and porcelain. The sumptuous, regal rooms embrace a terrace decorated with a rocaille fountain. Villa Garibaldi, in Piazza Marina, is removed from the hustle and bustle and has plenty of shady spots in which to shelter from the hot sun. It was built between 1861 and 1864 by architect Giovan Battista Filippo Basile and dedicated to hero Giuseppe Garibaldi to celebrate the birth of the Italian nation. Many exotic plants can be found here, including the majestic Ficus macrophylla subsp. Columnaris or Ficus magnolioide, a tree that is native to the tropical rain forests. With its 10,000 cubic metres of foliage, it is the largest tree in Europe. That is why it is always admired by people from all over the world. In the evening, Piazza Marina is transformed: eateries in which to sample typical dishes and local wines, pubs for an apéritif, with live music and popular songs, street food of all kinds. On Sunday mornings, there is a colourful and characteristic antiques market, full of objects, vintage clothes, books and much more at reasonable prices. For the romantics, a carriage tour is just as exciting, from which you can enjoy the beauty of the old town.

8. Street food and ancient markets
The ranking, drawn up by the American network Virtual Tourist, places Palermo in 5th place among the best producers of street food in the world. The street food tour is a must along with the tours of the ancient markets of Palermo, Vucciria, Ballarò, il Capo and Borgo Vecchio, nowadays animated by the city’s nightlife, which has elected them as favourite chosen them as meeting places for leisure evenings.
Let’s discover them in a morning or with a tour by night: it will be like crossing millennia of history, art, scents, flavours and the atmospheres of diverse civilisations. In the tangle of alleyways, you can discover a multitude of sensations: among the stalls full of colourful merchandise, the Palermitans often eat food cooked in the streets, nibbling with their hands. Panelle e cazzilli, pane con la milza, sfinciuni, stigghiole, polpo bollito, are just a few of the specialities that have made Palermo one of the world capitals street food. Flavour and tradition distinguishthe Sanlorenzo Market; it’s worth a visit in its own right. It is located in an old citrus factory dating back to the 1940s, which has been restored by combining the original structure with modern design elements, with a special focus on reuse art. There are various culinary specialities in nine shops and a selection of around 2,800 products from 250 Sicilian suppliers. You can shop for food or eat dishes prepared according to traditional local recipes. This is a true indoor market that brings together some of the most interesting selected food and wine products: from Slow Food presidia to all the other products that give rise to Sicily’s extraordinary biodiversity, with its 29 PDO and PGI products and 41 Presidia.

9. A stroll in Mondello
Mondello’s beach is one of the most beautiful in Sicily, from spring to autumn, it offers safe bathing also for the less able to swim and for children. The white sand is a palette for the sea, the sun and the clouds that paint an infinite range of colours, from turquoise to emerald green. Colours that remain impressed in your memory. The promenade along the seafront, under tall maritime pines, between palm trees and sporadic houses in the Art Nouveau style, will allow us to put our thoughts in order, to chat, to indulge in jogging or simply breathe in the beneficial scent of the sea, rich in iodine. The seaside village, “la piazza”, awaits us with its cafés and restaurants by the sea, or takeaways, to indulge in seafood and ready-to-eat sandwiches. The bathing season runs from May to September, when the beach is equipped with deckchairs and umbrellas and the characteristic multicoloured wooden cabins. Mondello abandons its solitary, reflective winter appearance and fills with carefree voices, sunscreen and young people on mopeds. The change of season is marked by the World Festival On The Beach, the famous international water activities exhibition, which usually takes place between May and June.

10. Palermo and surroundings
If you have the chance, don’t forget to visit the surrounding area: Borgo Parrini a Partinico, Terrasini e Cinisi, The Museo dell’Acciuga ad Aspra and the famous historic Villas ofBagheria, Caccamo, Monreale and its Cathedral. We can move around by motorbike or bicycle, visit the singularly picturesque hamlets on the Madonie Mountains, some of Italy’s most beautiful: Castelbuono, Cefalù, Geraci Siculo, Petralia Soprana.

Departure notes: FROM JUNE TO SEPTEMBER 2023